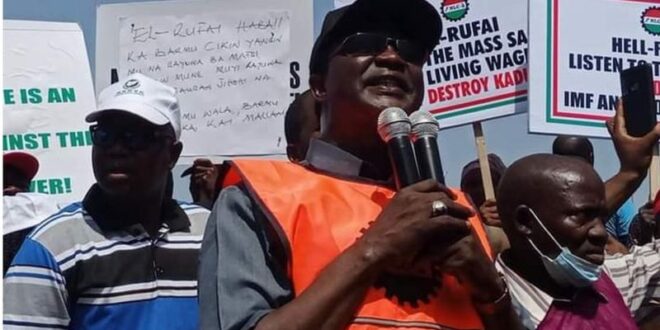 Wabba said this in an interview with journalists at the sidelines of the NLC protest in Kaduna.

Workers in the state had embarked on a five-day warning strike to protest against the decision of the state government to lay-off thousands of civil servants in the state.

The allegation of the NLC President is coming few hours after he was declared wanted by the Governor of Kaduna State.

El-Rufai, had claimed that the NLC President and other union leaders were in hiding over alleged economic sabotage and attacks on public infrastructure in his state.

The Governor in a Tweet, placed an undisclosed reward for information on their whereabouts.

He said, “Ayuba Wabba and others of NLC Headquarters declared wanted for economic sabotage and attacks on public infrastructure under Miscellaneous Offences Act.

“Anyone that knows where he is hiding should send a message to @MOJKaduna. KDSG. There will be a handsome reward.”

But reacting to the development, Wabba alleged that based on credible intelligence received by the NLC, the governor had hired one Mr Hassan to lead thugs to disrupt the workers protest.

Wabba said immediately the congress received the information, he quickly intimated the security agencies about the planned attack by those allegedly hired by the governor.

He said “Today is a very sad moment in the history of democracy in Nigeria.

“Early in the morning today we got credible information that El-Rufai has hired one Alhaji Hassan Gwosakan to hire some thugs to come attack us.

“So I called the DSS headquarters, and gave them the information, while we were here they came, but we thank God we have dismantled them, we have chased them away because we have the numbers.

“We are not thugs and we are not using thugs, we are using Nigeria workers.”

Recall, NLC had on Monday insisted that there was no going back on its five-day strike action which began on Monday.

The strike action have paralysed major activities in the state as  schools, water, banks, hospitals, electricity, rail and air services were shut down.