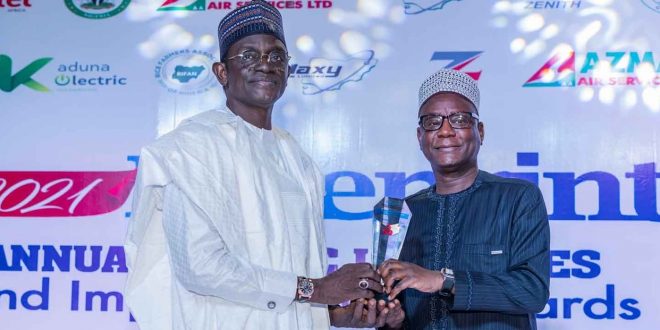 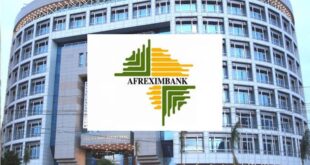 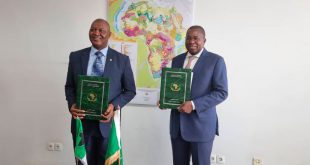 African Development Bank Group President Dr. Akinwumi Adesina has been awarded Nigeria Global Brand Award of the Year 2021 by Blueprint Newspapers, a national daily print and newspaper in Nigeria. The award is in recognition for what the newspaper describes as Dr Adesina’s pragmatic and purposeful leadership.

More than 30 Nigerians were recognized during the 2021 Annual Public Lectures and Impact Series/Awards ceremony held on the 16th of August  at the International Conference Centre in Abuja. Guests included Governor Yahaya Bello of Kogi State, Governor Mai Mala Bunu of Yobe State, Minister of Information and Culture Lai Muhammed, and Minister of Youths and Sports, Sunday Dare. Others were His Royal Highness, the Emir of Kontagora, Alhaji Muhammadu Barau Mu’azu III, and various representatives of government, the private sector and members of the diplomatic corps.

Governor Bunu, who is also the chair of the 2021 Annual Public Lectures and Impact Series/Awards, congratulated the award recipients. “I believe the Award will spur the recipients to continue to enhance the productivity of their respective organisations and also encourage them to do more for humanity,” he said.

According to Mohammed Idris, Chairman and Publisher of Blueprint Newspapers, Adesina received the award “because of his pragmatic and purposeful leadership, and the string of successes he has recorded as a national and international figure. The innovative ways he is working as the President of African Development Bank are worthy of our recognition.”

Director Barrow said: “The conferment of the prestigious Nigeria Global Brand Award of the Year 2021 on the African Development Bank president is a testimony of the transformational leadership, positive contributions and impact he has brought to the bank and to Africa through the implementation of the highly innovative High 5 priorities.”

Since 2015, when Adesina’s leadership began, the African Development Bank Group has secured the largest ever general capital increase in its history, from $93 billion to $208 billion. Over the last six years, the bank group’s High-5 operational strategy—launched by Adesina—has benefited 335 million Africans. Adesina was also instrumental in the creation of the Africa Investment Forum, the continent’s premier investment marketplace, which has attracted $110 billion in investment interests in Africa since it was founded in 2018.

Adesina’s leadership and its impact on bank operations has been widely recognized. In July of this year, Publish What you Fund, a global campaign for aid and development transparency, ranked the African Development Bank the most transparent institution in the world—up from fourth place in 2020—for its sovereign operations. The index is the only independent measure of aid transparency among the world’s major development agencies.

Previous Court Of Appeal Dismisses Case Against SON For Rejecting Importation Of Sugar Unfortified
Next FG approves N54.82bn for projects in two ministries