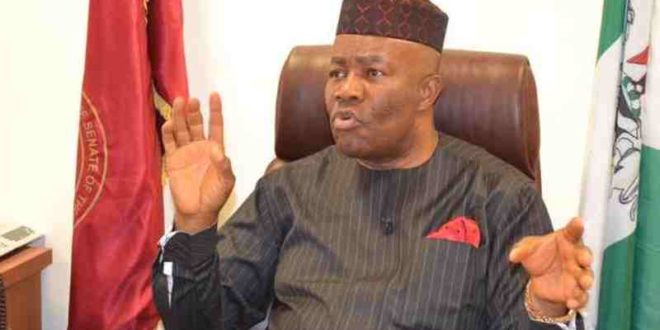 The federal government on Thursday promised to apply the law to remedy the deficiencies outlined in the forensic audit report of activities of the Niger Delta Development Commission (NDDC) submitted to it by the Minister of Niger Delta Affairs, Godswill Akpabio in Abuja.

The report is coming 16 months after President Muhammadu Buhari ordered a forensic audit into activities of the commission.

The Attorney General of the Federation and Minister of Justice, Abubakar Malami (SAN) received the report on behalf of the federal government.

Speaking during the brief ceremony, Malami said the remedies would include, but not limited to initiation of criminal investigations, prosecution, recovery of funds from those found to have misappropriated funds of the commission.

He noted that considerable resources have been channeled by the federal government to the development of the Niger Delta from 2001 to 2019, adding that the audit was important.

According to the minister, individuals found not to have properly utilized the commission’s funds for the public purposes for which they were meant, would be prosecuted.

He said: “In all these instances of actions, legal due processes will strictly be complied with.

“The President has directed that the forensic audit report be forwarded to the Federal Ministry of Justice for a legal review and relevant Ministries, Departments and Agencies of Government will be engaged in doing justice to the findings accordingly.”

The minister recalled that the president ordered for a holistic forensic audit of the activities of the commission from inception to August 2019 in response to the yearnings of the people of the Niger Delta region to reposition it for effective service delivery.

The minister stated that the president was concerned with the colossal loss occasioned by uncompleted and unverified development projects in the Niger Delta region, in spite of the huge resources made available to the commission, hence the audit.

“We have on record over 13,777 projects, the execution of which is substantially compromised.

“The Federal Government is also concerned with the multitudes of Niger Delta Development Commission’s bank accounts amounting to 362 and lack of proper reconciliation of accounts,” the minister noted.