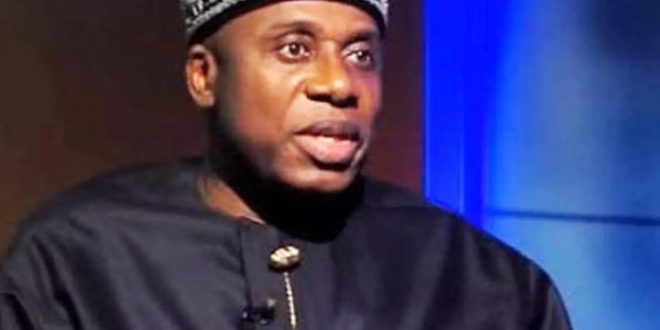 Wike Bombs Amaechi, Described Him As A Failure

Rivers State Governor, Nyesom Wike, has said his predecessor, Rotimi Amaechi, was a total failure as Minister of Transportation, saying he brought nothing to his state.

Also, he took a swipe at Amaechi, saying the Rivers State Government did not give state burial to late four-time Minister Alabo Tonye Graham-Douglas, and Amechi did nothing when the elder statesman was ill.

Wike spoke at the inauguration of the re-constructed ultra-modern seven-storey office complex in Port Harcourt on Monday.

He said even the Rail Line, done in other parts of the country under Amaechi’s supervision, never got to the former Minister’s state while he held the position for seven years.

He said, “Tell Rivers State people. As a former Minister of Transportation what did you do for your people for seven good years? You were interested in doing business with CCECC (a Chinese firm). Up till now, no gauge we have not seen anyone from Port Harcourt to Maiduguri. Show Rivers people what you did for them.”

Wike said as a Minister under former President Dr. Goodluck Jonathan, he attracted a lot of development to the state and gave grants to some tertiary institutions in the state and wondered why Amaechi, who was termed a super minister, could not do the same for his state.

“When I was a minister – a junior minister for that matter – I brought the Faculty of Law in the University of Port Harcourt. I brought Oil and Gas Polytechnic to Bonny.

He added, “You are not happy that the state did not give Alabo Graham Douglas a state burial. This state government committed so much money to make sure Alabo survives. We didn’t spend less than N50 million to make sure our beloved statesman survives.”