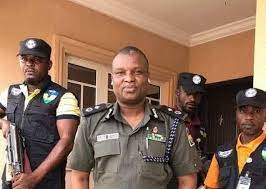 The Federal High Court sitting in Abuja on Tuesday denied the suspended Deputy Commissioner of Police, Abba Kyari, bail in the alleged drug trafficking case instituted against him and two other defendants.

This is third bail application filed by Kyari before the Abuja court division.

Recall that in a fundamental human right suit filed by Kyari before Justice Inyang Ekwo, his lawyer sought for his bail on liberal terms citing his diabetic medical condition.

But the NDLEA had tendered a detention order from another court division mandating the agency to keep the police officer and others for 14 days for further investigation before subsequent arraignment in court.

Ekwo had ruled that he could not grant him bail because of an existing detaining order by a coordinate court.

After Kyari’s arraignment before Justice Emeka Nwite on March 14,  Kyari and others who are facing charges bordering on the possession of 21.35kg of cocaine, asked for bail again.

On March 28, the judge denied him bail in a ruling following the objections raised by the Director, Prosecution and Legal Services of anti-narcotics agency, NDLEA, Mr. Joseph Sunday.

The NDLEA lawyer had argued that Kyari would jump bail because of the extradition request of the United States against him (relating to alleged money laundering with Hushppupi) as well as the allegations levelled against him in the country.

The court at the time, had agreed with the NDLEA thereby refusing Kyari bail.

The defendants, undeterred, filed another bail application before same judge.

Meanwhile , the extradition application against Kyari was on August 29 dismissed by Justice Inyang Ekwo for contravening the Extradition Act.

In the fresh bail, Kyari and two other suspended police officers urged the court to admit them to bail  on fresh or new grounds or review the earlier bail application refused by the court.

They contended that their lives were threatened  at the Kuje Correctional Centre due to attacks by terrorists.

They also argued  that some Eastern Security Network members and other remanded terrorists and armed robbers who were arrested by the Kyari team are at Kuje jail, constituting a threat to their life.

Kyari’s lawyer further argued that all the charges against him are bailable within the eyes of the law and were in line with his fundamental human rights.

But the NDLEA asked the court to deny them bail, adding that the new facts raised by Kyari are unsubstantiated.

NDLEA further argued that if threats to their life were the defendants s new argument, the court should transfer them to another detaining facility.

It alleged that Kyari has strong connection with members of the police and some elements of the underworld.

In his ruling on Tuesday, Justice Emeka Nwite said if the court becomes aware of new circumstances regarding a defendant’s remand, he can exercise his jurisdictional powers for or against parties.

He held that the complainant failed to counter the new facts raised by Kyari and others.

Nevertheless, the judge held that his threat to life is not one of the factors for consideration in granting bail.

He said it has not been demonstrated how the new issues raised by the defendants will not result in Kyari jumping bail.

“In view of the foregoing, the applicants has still not provided reasons for bail and my former order is sustained,” he said.

The sixth and seventh co-defendants to Kyari (Chibunna Patrick Umeibe and Emeka Alphonsus Ezenwanne) had on March 14 pleaded guilty to possession of illicit drugs while Kyari and others denied the charges.