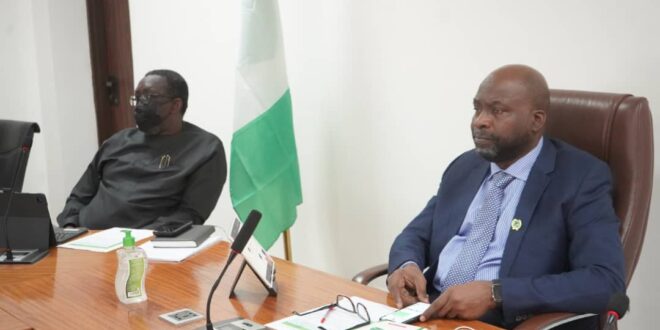 The Chairman of the Presidential Advisory Committee Against Corruption (PACAC) Professor Itse Sagay, SAN has enjoined African leaders to join forces against corruption, saying that Africa was the worst hit by corruption and must be fought vigorously.

The PACAC Chairman said this through the Executive Secretary, PACAC, Prof. Sadiq Isah Radda, while delivering his opening remarks at the 5th African Union Day of Anti-Corruption on the theme “Regional Economic Communities: Critical Actors in the Implementation of the African Union Convention on Preventing and Combatting Corruption”.
Speaking on some of the social problems caused by corruption in Africa, the PACAC Chairman advised African leaders to work tirelessly and also collaborate in order to achieve better results in the anti-corruption fight.

Prof. Sagay went further to say that Africa was bleeding as a result of Illicit Financial Flows (IFFs) and therefore urged African States to cooperate and speak with one voice to ensure that IFFs and looted funds stashed in other jurisdictions were recovered and repatriated.
“Instability in Africa would lead to instability in the World,” he stated while stressing on the need to combat corruption in Africa.
Speaking at the Opening Ceremony, the Chairman of the Independent Corrupt Practices and Other Related Offences Commission (ICPC), Prof. Bolaji Owasanoye, SAN, said that the theme to mark the AU Day of Anti-Corruption was apt as it was time for the practical and sustainable implementation of the AU resolutions against corruption.
Prof. Owasanoye also lent his voice on the need for synergy amongst agencies, in experience and information sharing in order to advance the scope of the anti-corruption fight.

Speaking on some of the achievements of the Commission, Prof. Owasanoye explained how ICPC had collaborated with the media, Civil Society Organisations, MDAs, Anti-Corruption Agencies, traditional and religious bodies and the youths in order to nip corruption in the bud.

The ICPC boss expressed the belief that the outcome of the event would guide ACAs on its activities in support of anti-corruption measures for the benefit of the African region. He went further to say that the Commission would continue to intensify its efforts for the effective prevention of corruption by blocking loopholes.
In his goodwill message at the event, the Chairman Senate Committee on Anti-Corruption, Senator Suleiman Abdu Kwari, advised that a futuristic approach be adopted by anti-corruption agencies in tackling corruption related issues in Africa.

In his own remarks, Director and Chief Executive Officer NFIU, Modibbo Haman Tukur opined that for sustainable development to be achieved in Africa there was need for the AU Agenda 2063 to be adopted and implemented at both regional and national levels.

He therefore advised that funds which had been earmarked for social and developmental purposes, in line with the Agenda 2063 goals and priorities, be used judiciously to reflect transparency, accountability and integrity.

The EFCC Chairman, Abdulrasheed Bawa, in his remarks said that corruption was a serious threat to the development, prosperity, stability and security of the African continent. Bawa, who was represented by the Director of Intelligence, Abubakar Saad, also said that Regional Economic Communities (RECs) should encourage trade and cooperation to prevent corruption as well as foster joint training and information sharing among anti-corruption agencies in Africa.

Also delivering his remarks at the event, the Chairman of the Code of Conduct Bureau (CCB), Prof. Mohammed Isah, represented by Fatima Kere-Ahmed said that corruption was one of the obstacles to sustainable development, security and welfare in Africa, and therefore stressed the need for synergy amongst anti-corruption agencies.

In his remarks, Country Representative United Nations Office of Drugs and Crime (UNODC), Oliver Stolpe, said it was important for Nigeria to share initiatives with other African countries, especially to ensure that citizens were protected from the effects of corruption.

A technical session was held and issues bordering of IFFs, asset recovery, the role of RECs in the fight against corruption, amongst others, were discussed and addressed by panelists from ICPC and EFCC. The event was organized by PACAC and other collaborating partners such as ICPC, CCB, EFCC and NFIU.