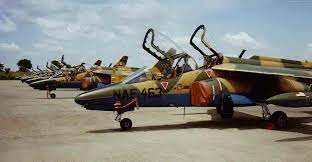 The Commander, Presidential Air Fleet, Air Vice Marshal Abubakar Abdullahi, has decried the maintenance costs of the aircraft under the unit, which he said, are now being underfunded, warning of the safety implications.

Abdullahi told the House of Representatives Committee on National Security and Intelligence that reduction of the proposed Overhead Cost proposed by PAF, by the Budget Office of the Federation under the Federal Ministry of Finance, Budget and National Planning, will further make it difficult to maintain the presidential fleet.

The PAF provides secure airlift to the president, the vice-president, their immediate families and other top government officials.

PAF was indebted to several service providers for various upgrades carried out on the 10 aircraft in the fleet to meet the required airworthiness. Due to inadequate funding, some installations on the aircraft had again been postponed to 2023.

Abdullahi had, in his budget defence presentation to the National Assembly, also complained that only N1.5bn was allocated for the maintenance of the aircraft out of the proposed N4.5bn.

The budgetary allocation to the PAF had risen by 121 per cent in eight years.

He partly said, “Please note that the shortfall in the Overhead Cost usually affects aircraft maintenance activities in the fleet. The inadequacy of this provision was brought to the attention of the respected committee as it has always been during the budget defence and oversight visit.

“I wish to bring to your attention that aircraft maintenance, which accounts for 46 per cent of the overall budget proposal, is an integral part of the Overhead Cost. Consequently, the shortfall of the Overhead greatly affected aircraft maintenance activities in the fleet. Some mandatory upgrades were carried out on a credit basis, on the fleet’s longstanding relationship with maintenance companies, while others have been moved to the year 2023 budget.

Previous INEC Suffered 50 Attacks In 15 States Ahead Of 2023 Election, Yakubu Tells Reps
Next ‘Our country is lucky to have this great man’–Tinubu Celebrates Buhari At 80