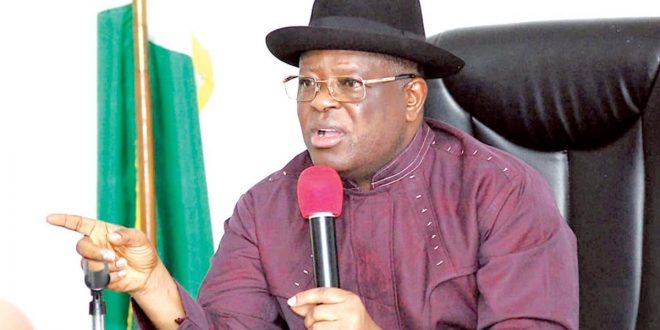 Governor David Umahi of Ebonyi State and Chairman, South East Governor’s Forum, has boasted that if he clinches the Presidential ticket of All Progressive Congress(APC)he would defeat the candidate of the Peoples Democratic Party (PDP), Atiku Abubakar, before 12 noon of the election day.

The Governor who is a frontline Presidential aspirant in the South East zone stated this when the National leadership of the Nigeria Union of Journalists and National Association of Women Journalists, (NAWOJ) paid him a courtesy visit at the new Presidential lodge, Government House, Abakaliki on Sunday.

Umahi who was not happy with the show of financial recklessness exhibited by some presidential aspirants of the PDP, during their Party’s primary election in Abuja, added that if he was President Buhari, he would won’t hesitate to arrest the aspirants.

He said “assuming I was the President, I would have impounded those vehicles in Abuja and arrested the aspirants behind them. I weep for this country’

The APC Presidential aspirant re-emphasized that he left PDP because the South East was marginalized under the reign of the PDP, adding that the achievements he has so far recorded under the APC administration remains unbeatable and indelible .

He called on Nigerians to cast their votes for leaders with enviable pedigree and antecedents, rather than those with no vision to transform the country.

On Biafra, Umahi insisted that Ebonyi State will never be part of the new Biafra, because according to him ,the state has over the years suffered marginalization in the hands of other South Eastern States..

He applauded President Muhammadu Buhari for his enormous support to the growth and development of the State.

The Governor who charged Media practitioners to partner his administration in every sector advised them to stay away from any action that is capable of putting the media community in a bad light.

Earlier, the National President of NUJ, Chris Ishiguzo assured the Governor of the cooperation of the media even as he commended him for advancing the course of development in the State.