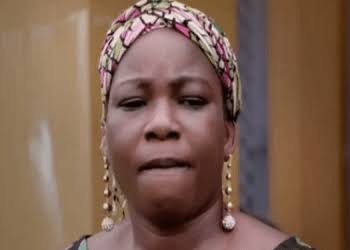 Onayiga was an interesting popular actress in Kunle Bantefa’s popular soap Fuji House of Commotion where she featured as Ireti.

The cause of her death is still Sketchy as of the time of going to the press.

Her death was announced by popular film critic, Shaibu Husseini, in his Facebook page.

“I have just been informed that the accomplished Stage and Screen Actress and Fellow of Theatre Arts Auntie Sola Awojobi Onayiga ‘has’ passed on.

“Auntie Sola, who is best known for living the role of Ireti aka Catering practical in the defunct television sitcom ‘Fuji House of Commotion delightfully’, Reportedly passed on this morning. Journey well, Ma! Journey Well!”

In another development, Ada Ameh collapsed and died on Sunday in Warri, Delta State around 11 pm.

According to reports, Ameh was said to have been a guest of an oil company toyshop and his family when she suddenly collapsed.

Ameh was rushed to the Nigerian National Petroleum Corporation’s hospital but passed on before they arrived the facility.