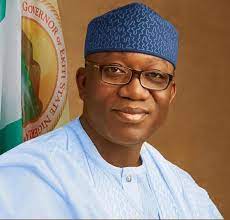 Ekiti State Governor and Chairman, Nigeria Governors’ Forum, Kayode Fayemi will formally declare his intention to run for the position of President of the country on Wednesday in Abuja.

His Chief Press Secretary, Yinka Oyebode, made this known in a statement issued to journalists on Tuesday.

According to him, Wednesday’s declaration, tagged, ‘Unveiling My Nigeria Agenda’, would lay to rest speculations on whether Fayemi would run for the Presidency or not.

Oyebode said his principal had discussed his plan to run for the number one office with the President, traditional rulers and political leaders across states in the Federation.

It partly read, “Dr Fayemi’s engagements with political and traditional leaders went on side by side with consultations with his colleague governors, especially those elected on the platform of the ruling All Progressives Congress. As at date he has conferred with and shared his vision with no fewer than 20 of the 22 APC governors, in the consultation process that is expected to run till the party’s primaries, later in the month.”

“The NGF Chairman said the engagements with the traditional rulers and political leaders provided an avenue to share and listen to their perspectives on the ideal approaches to building a united country based on justice, freedom, equity and the rule of law. The aggregate opinion, counsel and goodwill received during the consultation period will form the crux of his declaration on Wednesday at the nation’s capital city,” the statement added.

Born on February 9, 1965, Fayemi had chaired the party’s National Convention Planning Committee that produced Buhari as presidential candidate for the 2015 general election.

With today’s confirmation, Fayemi, an associate of APC leader, Bola Tinubu, is officially in the ring with the ex-governor of Lagos State.

Both the PDP and the APC presidential primaries have been scheduled for the end of May while Nigerians watch with rapt keenness as the two prominent parties elect their flagbearers at their conventions in four weeks’ time.

Whilst the APC pegged its Nomination and Expression of Interest Forms for N100m, the PDP sold its own for N40m.