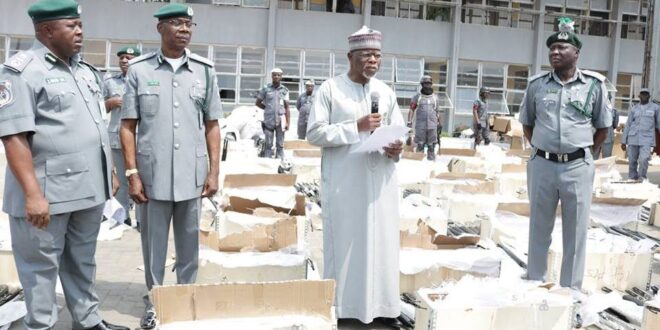 The Nigeria Customs Service, Seme Command, said it impounded 10,865 jerrycans of Premium Motor Spirit with a Duty Paid Value of N65.6 million from January 2022 to date.

The Customs Area Controller, Seme Command, Comptroller Bello Jibo, gave the figures during a media briefing on the handing over of seized illicit drugs and suppression of smuggling activities on the petroleum product.

Jibo noted that this was in a quest to ensure the safety and well-being of Nigerians, most especially in the fight against drug trafficking.

Jibo said, “The continuous surveillance of the beaches and creeks by our men, has yet recorded another huge interception of 1,600 jerry cans of petroleum product, 30 fitres each.”

The arrest was said to have been made in the late hours of Tuesday, June 7, 2022, along Seme-Badagry waterways.

Previous Why Buhari didn’t impose consensus candidate – Femi Adesina
Next We Will Give You 90% Of Our Vote, South-West APC tells Tinubu