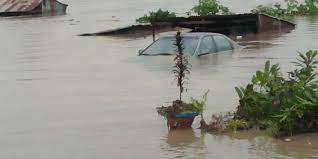 The house of representatives has asked the federal government to request a supplementary budget of N100 billion as intervention fund to address the effect of flooding across the country.

The lawmakers also asked the ministry of finance and office of the accountant-general to “immediately” release the sum of N5 billion into the special ecological fund accounts of each state and the federal capital territory (FCT) to “mitigate the effect of flooding that recently ravaged the entire nation”.

The resolution was passed during plenary on Monday following the adoption of a motion of urgent public importance sponsored by Henry Nwabuba and Ibrahim Isiaka.

Recently, parts of the country have been hit by flooding which has led to the destruction of properties and displacement of millions of persons.

Leading the debate on the motion, Nwabuba, the lead sponsor, said the flood has affected the lives of Nigerians.

“Waterways navigation and hydroelectric power have also been impaired leading to colossal financial losses in trillions of naira.”

The lawmaker warned that flooding will continue and may even get worse if nothing is done to care for the environment.

“The need to change our attitude towards the mother earth is of utmost concern if we really desire to put a check or control to these natural disasters that we are left to contend with,” he said.

“We have observed incident trends of late, amongst localities and even countries.

“It has become a very disturbing issue, the spate of flood risk exposure amongst vulnerable settlements and communities.

“We pay deaf ears to the sound and presence of risks associated with flooding. One thing is clear, that they will surely occur whether we plan for them or not.

“But strategic planning and adequate funding will help mitigate the effects and facilitate quick and better recovery of lives, properties, economy and overall environment.

“With the public outcry of limited funds, reactive response should be changed to proactive response to increase effectiveness of management and reduce losses of life and properties.”

Following the adoption of the motion, the lawmakers mandated the committee on legislative agenda to coordinate a “technical working group between the executive and legislature as well as industrial experts and stakeholders to articulate an action plan to forestall a repeat of such flood and erosion disaster in 2023 and beyond”.

The legislators also asked the appropriations committee to make provision of N200 billion in the 2023 budget for the ecological project office for “flood preparedness, mitigation, response, recovery and relief packages”.

The committee on legislative compliance is expected to ensure compliance and report back to the house within one week.