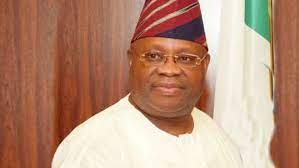 The Independent National Electoral Commission has declared the candidate of the Peoples Democratic Party, Senator Ademola Adeleke, the winner of the Osun governorship election.

The Returning Officer for the election and Vice Chancellor of the University of Lagos, Prof. Oluwatoyin Ogundipe, announced that Adeleke got a total of 403,371 votes beating the incumbent, Adegboyega Oyetola of the All Progressives Congress, who got 375,027 votes in a keenly contested race.

Adeleke and his nephew, award-winning Nigerian singer, David Adeleke, popularly known as Davido, were seen in a video that surfaced online.

Although many believed the Osun governorship election was a two-horse race between Governor Adegboyega Oyetola and Senator Adeleke, no fewer than 15 political parties partook in the election.

The election was held across 3,763 units in the 30 LGAs of the state and witnessed a huge voter turnout and was largely peaceful.