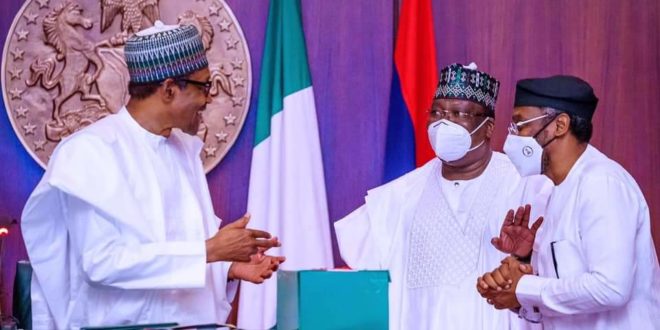 The federal government has proposed the sum of N12.66trillion as aggregate expenditure for 2021 on a deficit of N5.16 trillion to be financed by total loan packages of N4.28 trillion.

The proposals as contained in the 2021- 2023 Medium Term Expenditure Framework (MTEF) and Fiscal Strategy Paper (FSP) forwarded to the Senate by President Muhamnadu Buhari for approval, targets N481.41billion as statutory transfers, N5.75trillion as recurrent expenditure, N3.33 trillion for capital expenditure and N3.12 trillion for debt servicing.

Critical parameters and assumptions upon which the proposals are based as contained in the documents acknowledged by the President of the Senate, Ahmad Lawan are $40 as oil price benchmark,  1.86 million barrels as oil production per day,  N360 to US dollar as exchange rate etc.

Also included in the proposals are N500 billion intervention fund against COVID-19 pandemic, N52 billion for Public Works Programme, N32.46 billion for Social Intervention Programme, N5 billion as bail out for the aviation sector, N60 billion for maintenance of roads through direct labour across the six geo-political zones etc.

Aside the N4.28 trillion, the federal government as proposed in the documents, targets the sums of N205.15 billion from privatisation proceeds to fund the budget.

President Buhari in a letter attached to the documents said:  “It is with pleasure that I forward the 2021 – 2023 Medium Term Expenditure Framework and Fiscal Strategy Paper (MTEF/FSP) for the kind consideration and approval of the Distinguished Senate.

“Let me seize this opportunity to express my deep gratitude for the cooperation, support and commitment of the leadership and distinguished members of the Senate in our collective efforts to sustain the restoration of the January – December financial year.

“In line with our commitment, we have worked very hard to achieve an earlier submission of the MTEF/FSP. This is to allow the National Assembly enough time to perform its important constitutional duty of reviewing the framework.

“I herewith forward the 2021 – 2023 MTEF/FSP as the 2021 budget of the Federal Government will be prepared based on the parameters and fiscal assumptions of the approved 2021 – 2023 MTEF/FSP. I seek the cooperation of the National Assembly for expeditious legislative action on the submission.”