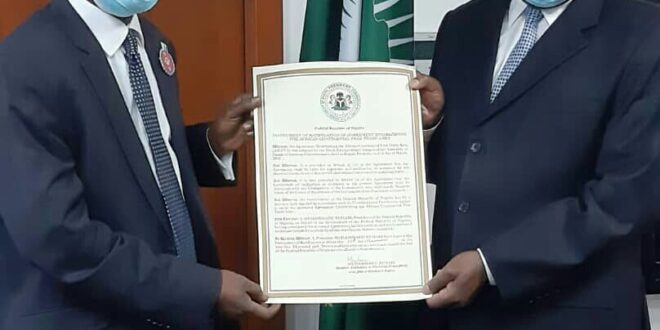 AfCFTA: Nigeria Deposits Instrument With AU, 20 Countries Yet to Ratify

Nigeria has joined the list of countries to formally ratify the African Continental Free Trade Area (AfCFTA) agreement, 26 days to the commencement of trading, Francis Anatogu, Secretary of the National Action Committee on the AfCFTA said on Saturday.

Accordingly to him, “the ratification instrument was submitted by a delegation from the Ministry of Foreign Affairs led by Amb. Richard Adeola, Charge D’Affairs Nigeria’s Permanent Mission to the African Union and Mr. Francis Anatogu, Senior Special Assistant to the President on Public Sector Matters, and Secretary of the National Action Committee on the Africa Continental Free Trade Area.”

He added that: “This momentous event follows on the heels of the Federal Executive Council’s recommendation to His Excellency President Muhammadu Buhari to ratify the AfCFTA Agreement.”

Nigeria, with this very step, becomes the 34th African nation to deposit their instrument of ratification, a move that finally solidifies her mission to lead a single market for goods and services and free movement of persons within Africa, as well as demonstrates to the world her economic leadership position where her resources will be used to drive the vanguard of intra trade on the African continent.

The Commerce Africa reports that Nigeria’s decision comes after Cameroon, Lesotho and Tunisia submitted their own instruments on December 1 and 27 November respectively, leaving only 20 countries yet to ratify the treaty. They are Benin, Botswana, Burundi, Cape Verde, Central African Republic, Comoros, Democratic Republic of the Congo, Guinea-Bissau, Liberia and Libya. The others are Madagascar, Malawi, Morocco, Mozambique, Seychelles, Somalia, South Sudan, Sudan, Tanzania and Zambia.

The AfCFTA agreement entered into force on 30 May 2019 after the treaty was ratified by 22 countries — the minimum number required under the treaty — out of the 54 that agreed to be members of the bloc. Eritrea is the only country which has yet to make any commitment to the continental body.

Trading was earlier scheduled to start on 1 July this year but it was postponed for six months owing to the COVID-19 pandemic.

The AfCFTA provides the opportunity for Africa to create the world’s largest free trade area with the potential to unite more than 1.2 billion people in a $2.5 trillion economic bloc and usher in a new era of development. It has the potential to generate a range of benefits through supporting trade creation, structural transformation, productive employment and poverty reduction.