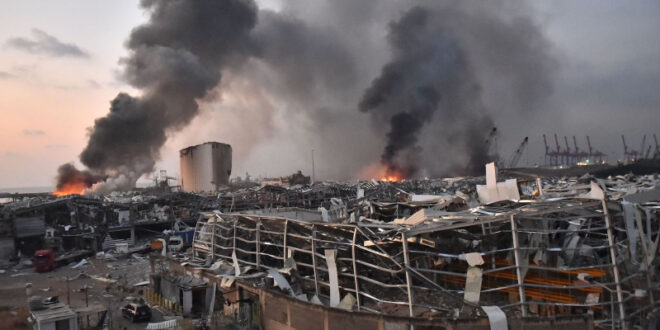 TOPSHOT - EDITORS NOTE: Graphic content / This picture taken on August 4, 2020 shows a general view of the scene of an explosion at the port of Lebanon's capital Beirut. - Two huge explosion rocked the Lebanese capital Beirut, wounding dozens of people, shaking buildings and sending huge plumes of smoke billowing into the sky. Lebanese media carried images of people trapped under rubble, some bloodied, after the massive explosions, the cause of which was not immediately known. (Photo by STR / AFP) (Photo by STR/AFP via Getty Images)

Lebanese authorities have said at least 78 people have been killed and some 4,000 wounded in a massive explosion at the port in the capital, Beirut.

The explosion on Tuesday sent shockwaves across the city, causing widespread damage even on the outskirts of the capital.

The cause of the explosion was not immediately clear. Officials linked the explosion to some 2,700 tonnes of confiscated ammonium nitrate that were being stored in a warehouse at the port for six years.

The death toll from the massive blast at a port warehouses near central Beirut has risen to 78, with over 4,000 wounded.

Officials said they expected the death toll to rise further after Tuesday’s blast as emergency workers dug through rubble to rescue people and remove the dead.

President Michel Aoun called for an emergency cabinet meeting on Wednesday and said a two-week state of emergency should be declared.

US President Donald Trump said the huge explosion that shook Beirut appeared to be a “terrible attack.”

“We have a very good relationship with the people of Lebanon and we will be there to help. It looks like a terrible attack,” Trump told reporters at the White House.

“I’ve met with some of our great generals and they just seem to feel that this was not some kind of manufacturing explosion type of an event … They seem to think it was an attack. It was a bomb of some kind.”

The US president, however, did not present any evidence to back his claim.