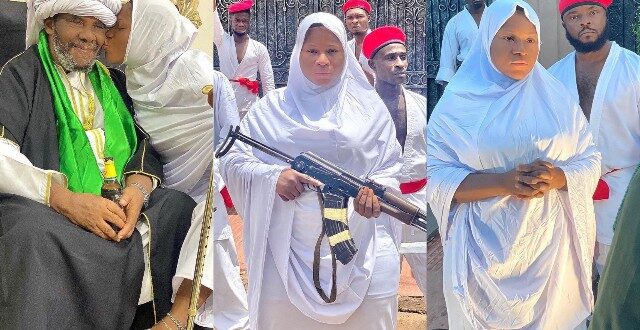 The Nigerian Army and ‘Fatal Arrogance’

It is baffling and hard to believe that the Nigerian Army under the current leadership of Lt. General Tukur Buratai would recruit the service of publicists for dark propaganda, rather than public relations to protect its image.

Just recently, the Army’s publicists shot a movie titled “Fatal Arrogance” that portrays the leadership and members of the Islamic Movement of Nigeria (IMN), popularly known as a Shi’ite group, as terrorists.

In their desperate execution of this plan, the publicists hired a veteran Nollywood Actor, Pete Edochie; a popular actress, Destiny Etiko, and a movie producer, Anosike Kingsley Orji, all Christians and Igbos, to portray Northern Muslims and by extension Islamic religion, in a bad light in the movie.

In the movie, Edochie is featured in a role wearing an Islamic outfit that makes him resemble Sheikh Ibrahim El-Zakzaky, leader of the IMN, who has been in detention since December 2015, after the altercation that his followers had with Nigerian soldiers. Over 348 people were killed in that incident, and the follow-up aggression having the army lay siege to the IMN headquarters, with the bodies of the dead secretly buried by the army in a mass grave.

The behind-the-scenes clip from the movie, which was shot in Igboland rather than a Northern city, is already generating a lot of controversies.

A popular Kannywood actor who was lured into taking part in the movie, Mallam Yakubu Mohammed, has regretted his appearance in it due to what has turned out as the film’s bad intent.

He said, “I never knew some of the scenes in the film will be portrayed in that manner… It was a film that showed the clash between Nigerian Army and Islamic brotherhood in Zaria, and many members of the group were killed. When I read the script, I saw nothing castigating Islam in it, but you know (a) script can change at some point, that was what happened.

“…There is a place that every Muslim, if he sees it, must be concerned. There is a photo of Mr. Pete Edochie walking around in a Muslim dress, with a bottle of beer in his hand and with a girl. I really regret appearing in that movie.”

Also, according to Mohammed, “I have told the producer to remove all my scenes in the movie, that I am ready to pay for damages, which is what the rule says.”

The Islamic Movement in Nigeria has equally petitioned the Inspector-General of Police, Mohammed Adamu, and the National Film and Video Censors Board, over the movie.

The spokesperson of the Movement, Ibrahim Musa, in accusing the Nigerian Army of furthering its campaign of aggression against the group through the sponsorship of the movie, stated that, “If film producers are not careful, some disgruntled elements in governance will make them side with the oppressors against the oppressed, as the film “Fatal Arrogance”, is meant to achieve.

“Genocide is involved here; any move to justify the brutal and inhuman Zaria genocide of December 2015 is an affront (to) the Rome Statute of the International Criminal Court.

“Evidently, for every Nigerian, these clips are meant to disparage the peaceful movement and portray it to the world as a violent armed movement.”

One of the promoters of the distasteful movie against the Islamic group is Terrence Kuanum, a Christian from Benue who authored a book with a similar title, “Fatal Arrogance”, in defence of the Nigerian Army against the Shi’ite. The book is apparently the inspiration behind this film.

I was also once a victim of the same Terrence Kuanum, who parades himself as General Buratai’s publicist. He had falsely accused me of being a patron of terrorist groups, in his distorted and apparently suborned response to my “Memo to President Buhari on the Service Chiefs”, which was widely published in the Nigerian print media.

In his deliberate attempt to incite the military and victims of terrorism against me, on the basis of untrue accusations, Terrence compromised the websites of highly credible, as well as notoriously incredible, media platforms, by planting his offensive article there, mostly without the knowledge of the publishers and editors of some of these platforms. Subsequently, about 15 of these media organisations had to delete the highly libellous content from their websites, while offering profound apologies for the infiltration of their systems that allowed that to happen.

In his over 3,000-word defamatory piece, revelling in insidiously deceitful claims, Mr. Terrence labelled me a Boko Haram supporter, an ISWAP propagandist and that I was on the payroll of terrorists.

Given how defamatory and harmful the allegations in the very lengthy article were, I officially reported this to security agencies, including the Nigeria Police, the State Security Service (SSS) and the National Intelligence Agency (NIA). Till date, none of the agencies has taken any action to interrogate the writer on the very grievous allegations that sought to impugn my professional integrity and cast me as a threat to national security. The security services seem to be afraid to invite the author of “Fatal Arrogance” for questioning because of his godfathers in the Nigerian Army.

Apart from moving about freely, Terrence Kuanum has exhibited the ‘fatal arrogance’ of being untouchable, not only by launching his book in Abuja, but also shooting the movie based on the book in Enugu, to the bewilderment of a sane society.

Terrence Kuanum’s odious activities revolve around his membership of an obscure ‘Global Amnesty International Network’, Television Nigeria (TVN) and other shadowy groups that support the leadership of the Nigerian Army.

The painful irony of this publicity attempt gone awry is the fact that the Nigerian military has an enviable reputation of professionalism, gallantry, resilience, and straightforwardness that do not require propaganda to push for a positive social narrative.

It is only the leadership of an institution that appears to have something ugly it needs to cover up that engages charlatans in an effort at dark propaganda, rather than more astute and professional public relations organisations. It goes without much contemplation to know that this very poorly thought-through and ‘Fatal Arrogance’ will backfire very badly on the image and reputation of an institution that should otherwise be encouraged for its potentials, and the work it is doing to keep Nigeria safe.