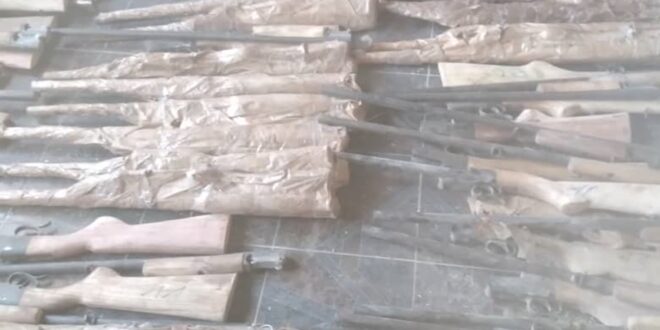 The Nigeria Customs Service (NCS) says it has intercepted 73 locally manufactured guns and 891 cartridges at Yauri, Zamare waterside in Kebbi.

The Customs’ Public Relations Officer, Joseph Attah, announced this in a statement on Monday in Abuja.

Mr Attah explained that officers of the NCS, Federal Operation Unit (FOU) zone B, who were on patrol along the waterside, had seized a truck loaded with locally produced rice.

According to him, some sacks were concealed under the bags of rice.

He said that upon careful examination, the sacks were found to contain the weapons.

The PRO said that three persons were arrested and detained while a preliminary investigation is ongoing.

Mr Attah quoted the Controller of FOU Zone B, Hamisu Albashir, as saying that the feat was a signal to all those who might be planning to bring any harmful items into the country through the zone.