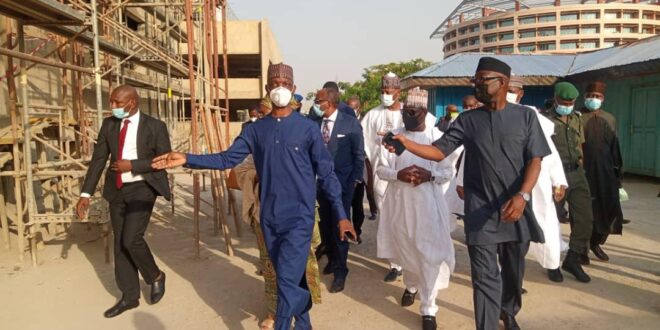 The New Multi-billion Naira Building of the Industrial Training Fund projected to be completed and occupied by June this year.

Speaking at the facility tour of the project, the Minister of Industry, Trade and Investment, Otunba, Richard Adeniyi Adebayo who was overwhelmed by the size and quality of the project said the edifice was very fantastic.

Otunba Adebayo while commending the Director General, Industrial Training Fund, Sir Joseph Ari for his quality style of leadership said the project has already started impacting on the economy by providing both direct and indirect jobs opportunities for some Nigerians.

He, however, promised to support ITF to ensure that President Muhammadu Buhari’s drive for the creation of one hundred million jobs in the country is achieve.

The Director General, Industrial Training Fund, Sir Joseph Ari led the tour of the building complex after the  FMITI 1st Quarterly Meeting of the Honourable Ministers, Permanent Secretary, Directors of Ministry and of Parastatal/Agencies.

Previous Bank of Industry Records N35.5bn Profit In 2020
Next BUA Group Lafiagi Sugar Refinery To Be Completed Next Year