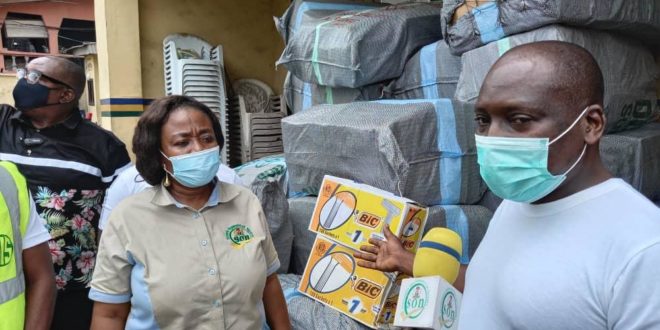 Police in Nigeria have confiscated 504 cartons of substandard Bic brand of shaving sticks from Ebute Ero Market in Lagos and further handed them over to the Standards Organisation of Nigeria (SON).

Describing the police’s effort as a demostration of robust inter-agency collaborations, a statement from the SON on Monday said the Divisional Police Headquarters, Ebute Ero, Lagos “handed over 504 cartons of seized suspected substandard Bic brand of shaving sticks to SON representatives in Lagos.”

According to the Divisional Crime Officer (DCO), Mr Bello Taofeek, while handing over the suspected substandard shaving sticks to SON, they were apprehended in a truck waiting to be offloaded inside the Ebute Ero Market following credible information provided by some patriotic Nigerians in response to the call by regulatory agencies for all to join the quality vanguard.

DCO Taofeek alluded to the existing robust collaboration between the Ebute Ero Police Command and SON as well as other regulatory agencies towards apprehending substandard and unwholesome products and the purveyors and pledged the continuous support of the Divisional Police Headquarters.

He stated that investigations were still ongoing to unravel those behind the consignments and the source with a view to bringing them to book.

Receiving the suspected substandard Bic brand of shaving sticks on behalf of SON, Coordinator of the Lagos State Office 1, Victoria Island, Engr. Nwaoma Olujie expressed appreciation to the Police authorities of the Ebute Ero Division for the existing collaboration, which according to her has yielded results in the apprehension of several suspected substandard products and those behind them in the past.

Engr. Olujie alluded to another 196 Cartons of the suspected substandard Bic brand of shaving sticks earlier evacuated by SON officials from the same Ebute Ero Market, bringing the total to 700 cartons with a street value of over N6.4million.

She reiterated the promise of the SON Director General, Osita Aboloma to ensure that all apprehended standards infractions would be prosecuted in accordance with the provisions of the SON Act number 14 of 2015 and the Nigerian Criminal Code.

The SON State Coordinator assured the public of SON’s preparedness to work closely with the Police to unravel those behind the suspected substandard shaving sticks.

Samples of the suspected substandard shaving sticks, according to her, would be sent to the laboratory for quality verification tests and analysis as part of the investigation.

She decried the unpatriotic activities of fakers of certified popular brands which according to her impacts negatively on genuine businesses, the health and safety of the Consumers and the economy of the Nation.

Engr. Olujie admonished dealers in markets in Nigeria to avoid such faked and counterfeited products like plagues, warning that the law would not exonerate them for circulating such substandard and unsafe products.

She also advised owners of popular certified brands not to relent in efforts towards brand protection, working closely with regulatory and security agencies.

According to her, SON has in place several initiatives to discover and apprehend suspected substandard products, including close collaboration with sister regulatory and security agencies as well as owners of certified brands, consumer feedback desks in its 42 State offices Nationwide, an interactive website as well as toll free lines to encourage credible information from patriotic Nigerians.