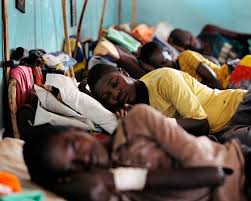 The Minster of Science and Technology, Dr. Ogbonnaya Onu disclosed this during the commissioning of the North-East zonal office of the Nigerian Institute for Trypanosomiasis Research (NITR), in Gombe in the weekend.

According to the Minister, Trypanosomiasis disease affects both humans and animals inflicting a great socio-economic loss to the country.

He explained that Trypanosomiasis in humans is called sleeping sickness, while when animals are affected it is known as River Blindness.

A statement signed by Abdulganiyu Aminu Director, Press and Public Relations of the Ministry quoted the Minister as saying: “There is no gainsaying the fact that river blindness is a devastating disease that impacts on the economy as well as education of school-age children who instead of being at school will be shepherding their blind parents and relations in villages and towns.’’

The disease, which is often referred to as the disease of the rural poor affects mostly farmers, fishermen, tourists, and cattle rearers, he added.

Dr. Onu further said that about 19.5 million cattle, 22 million sheep and 34 million goats are at the risk of infection.
“The disease reduces milk and meat protein carcass weight, calving rates, and hides Skins production with increase in abortion infertility and still birth.’’ the Minister added.
While saying that the cost of drugs used in treating the disease is enormous, Dr, Onu said the North-East will derive a lot of socio-economic benefits with the presence of the zonal office in Gombe.
He added that the Gombe was chosen in siting the zonal office because Gombe is well known for its large cattle population as well as other ruminants.
Dr. Onu said the zonal office will also go a long way in helping livestock farmers when cattle ranches are eventually established in the country.

Previous Court Dismisses Trump’s Election Suit in Pennsylvania
Next IPPIS: Understanding the Position of ASUU and AGF Ahmed Idris, By Yushau A. Shuaib