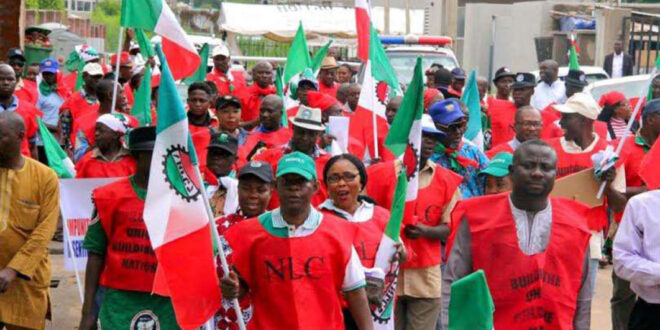 The No Alternative to Buhari – Osinbajo 2019 (NATBO 2019) has pleaded with labour unions to shelve their planned strike, stressing that shutting the nation’s economy now will be catastrophic for the nation.

Vincent Uba, National Coordinator, NATBO 2019, said in a statement that rather that protest, President Muhammadu Buhari deserved great commendation for his economic policies since 2015.

He stressed that Nigeria, like many other nations around the world, had suffered economically due to the COVID-19 pandemic and shutting the economy would further complicate issues.

“Nigeria, like all other countries of the world, is facing serious economic crises occasioned by the current COVID-19 pandemic ravaging the entire world.

“There is no nation on the globe that its economy is not in a turbulent state, and the citizens not crying over the excruciating hardships.

“Dealing with these economic crisis is the responsibility of every responsible government under the support and understanding of the patriotic citizens.

“Those who are economically informed know that Nigeria, under the leadership of President Muhammadu Buhari, is doing what it must do to keep the country moving.

“The recent policies and actions of government are not punitive measures, but remedial in nature to prevent the country from collapsing economically and socially.

Uba argued that since the advent of this administration, there had been global unforeseen events that could only have been managed by prudent, disciplined and courageous leadership such as the one demonstrated by President Buhari.

He added that from 2015 till date, there had been a glut in crude oil price, coupled with the challenges of corruption and insecurity, which only a leader like Buhari could have been able to handle.

“Five years down the line, Nigeria is still existing as a nation, as against certain predictions before the 2015 general elections that the country would disintegrate and cease to exist as a nation.

“All thanks to the astute leadership qualities of President Muhammadu Buhari, despite the sustained unpatriotic activities of IPOB and its allies.

“When the price of crude oil, which is the mainstay of Nigeria economy, crashed globally from over $150 per barrel to below $30 in 2015 and plunged Nigeria into a recession, President Buhari and his team were able to manage the situation and steer the country out of recession.

Uba, while acknowledging that some areas still experienced problems, stressed that the government should be encouraged rather than chastised.

He noted that the ban on importation of rice had exposed how the so-called foreign rice was not as good as the local ones, adding that the new tax reforms had also improved the nation’s revenue generation.

“Even though we know some areas still experience problems of power but it is not the same compared to what we were used to in the past.

“We should encourage the president and his team to continue with result-oriented reforms that would turn around the Nigeria economy today for a better tomorrow?

“This president was courageous enough to ban the importation of foreign rice and close the land borders to check the smuggling of the product.

“Under the prevailing dwindling oil revenue and the current effect of COVID-19 on the economy, government has to embark on alternative sources of revenue.

“Tax reforms, removal of subsidy on fuel and electricity tariff increase have become imperative at this time.

“If government should listen to the organised labour and reverse these actions already taken for fear of labour going on strike to shut the economy, then the economy will eventually be shut and the same labour will turn around to blame the government for doing nothing,” Uba said.

He called on the Nigeria Labour Congress, its allies and the citizenry not to judge the government unfairly on these current economic remedial measures.

He stressed that all Nigerians must be patriotic and show understanding in the spirit of sacrifice and embrace the good policies of government geared towards laying a solid economic foundation. (NAN)