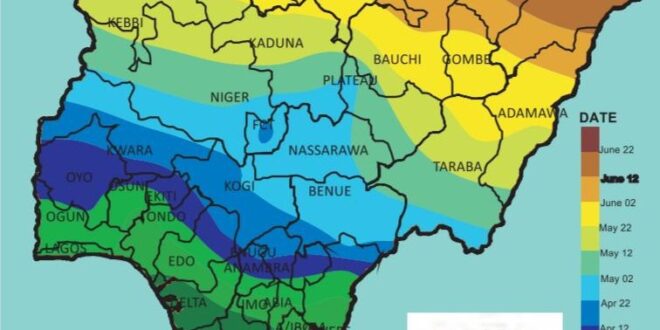 NIMET Warns Of Three Days Of Thunderstorms Across Nigeria

The Nigerian Meteorological Agency (NiMet) has predicted thunderstorms and cloudy weather across the country from Friday to Sunday.

This is coming shortly after the Nigeria Hydrological Services Agency (NHSA) warned that Nigeria is gradually inching closer to its peak rainy season with subsequent flood incidents.

The NHSA had urged states, local governments to embark on precautionary measures to prevent cases of flooding.

The outlook also showed that the inland and coastal cities of the South are expected to be cloudy with intervals of sunshine with prospects of a few thunderstorms over Rivers, Bayelsa, Lagos and Ogun in the morning hours.

“Later in the day, there are prospects of thunderstorms over parts of Kwara, Plateau, Niger and the Federal Capital Territory.

“Later in the day, thunderstorms are anticipated over Enugu, Imo, and Abia state. Also, parts of the coastal cities such as Rivers, Akwa Ibom and Bayelsa should expect similar weather activities,” it stated.

It also predicted cloudy to cloudy skies over the Northern cities with chances of isolated thunderstorms over parts of Gombe, Bauchi and Borno in the morning hours of Saturday.

It added that Sokoto, Yobe, Adamawa, Borno, Bauchi, Zamfara, Kaduna and Taraba States are expected to experience thunderstorms in the afternoon and evening hours.

It stated, “Later in the day, thunderstorms are anticipated over parts of Nassarawa, Kwara, Kogi and Niger state during the afternoon and evening hours.

“The inland and the coastal cities should be mostly cloudy with chances of few thunderstorms over Abia, Imo, Lagos and Ogun in the morning hours.

For Sunday, the outlook predicted partly cloudy skies with intervals of sunshine over the Northern region in the morning hours on Sunday.

Thunderstorms are expected in Sokoto, Bauchi, Gombe, Borno and Taraba during the afternoon and evening hours.

The outlook showed that the North central region would be cloudy with chances of few thunderstorms over Niger, Kogi and Kwara in the afternoon and evening hours.