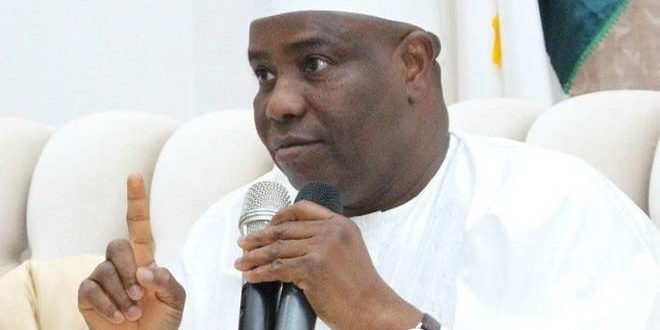 Governor Aminu Waziri Tambuwal(picture) of Sokoto state has called on stakeholders in the Northern region of the country to pool resources and capacity towards rescuing the region from ‘its backwardness in terms of education.’

A state by his Special Adviser on Media and Publicity, Muhammad Bello, said the Governor made the appeal on Tuesday whil playing a host to the delegation of the Committee of the Pro-Chancellors of Nigerian States’ Universities (CPCNSU) who paid him a condolence visit over the death of the erstwhile Pro-Chancellor of the Sokoto State University, Barrister Inuwa Abdulkadir at Government House, Sokoto.

“The governor, who commended the initiative to set up the CPCNSU, observed that the Northern part of the country is still “lagging behind in terms of education.

“He, therefore, applauded the forum, set up in 2005, which have “occupied themselves with the business of contributing to the development of education in our states and Nigeria in general.

“This is our collective responsibility to see that our younger ones are educated, particularly those children that are out of school.

“We as leaders should provide them with basic education by creating the enabling environment and making provisions for necessary infrastructure, learning materials and personnel for the education of our younger ones,” Gov. Tambuwal said.

“In his speech, the leader of the delegation of the Pro-Chancellors, Gen. Muhammad Magoro (rtd), told the governor that they were in the state to condole him and the people over the death of one of their members, Barrister Inuwa Abdulkadir.

“Gen. Magoro who noted that the deceased was a patriot who was vast in many fields of human endeavor, recalled that he was proactive as their member when he was alive.

“He prayed for the repose of his soul.”