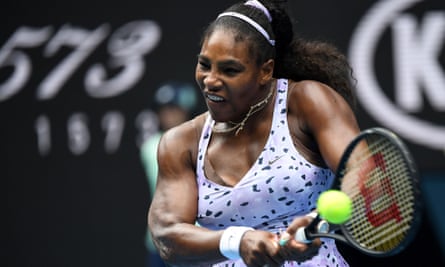 Serena Williams Back in First Match Since February

Serena Williams came back from the brink to start her first tournament in six months with a win.

A rusty Williams overcame fellow American Bernarda Pera 4-6 6-4 6-1 in the opening round of the inaugural Top Seed Open in Lexington, Kentucky.

Williams, the Open era Grand Slam record-holder, was in trouble at 4-4 in the second set and 0-40 on her own serve but dug herself out a hole and eased through the decider.

“Honestly, I knew I’ve been practicing really well and I wasn’t getting a good rhythm out here, and I just kept thinking: ‘Serena, play like you’ve been practicing,’” Williams said in a post-match interview. “So I knew that I could play a little bit better if I just hung in there.”

Williams’ last match had been in early February, when Anastasija Sevastova of Latvia handed the former top-ranked American her first loss in Fed Cup team competition on home soil. A month later, the coronavirus pandemic shut down all competitive tennis, including Wimbledon, which was canceled for the first time since World War II.

In contrast to her last match before the pandemic, which took place in a raucous atmosphere at a packed Angel of the Winds Arena in Everett, Washington, her match against Pera in Lexington was played behind closed doors, with players touching rackets instead of shaking hands at the end of the match and strict biosecurity measures in place to prevent the spread of the coronavirus.

“Right now I think sport has been one of the few things that can actually provide a breath of fresh air or a sigh of relief for people that are still stuck in their homes.”

Although Williams had enjoyed “every part of the lengthy break,” she said she also became “super, super careful” during the pandemic and “a bit of a recluse.”

The American, who has a history of blood clots and pulmonary embolism, said she now travels with “like 50 face masks.”