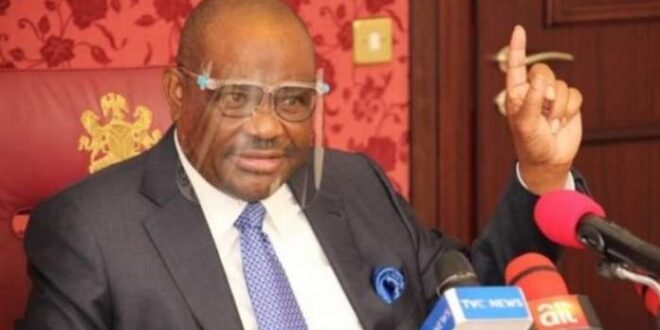 The Rivers State Governor, Nyesom Wike as expressed concern the continued destructive activities of the outlawed Indigenous Peoples Organization of Biafra (IPOB) in the State.

Wike, in his state-wide broadcast on Friday said security intelligence and surveillance have revealed that “IPOB has continued to expand its membership drive, holding meetings regularly, and expanding its logistical base, including the maintenance of illegal detention cells in Emenike and other parts of Diobu, Port Harcourt
My Dear Good People of Rivers State.”

“Recall that the IPOB was classified as a terrorist organization by the Federal High Court and subsequently proscribed in September 2017 by the Federal Government.

“However, despite its ban, the group has continued to operate in parts of the country, including Rivers State in furtherance of its alien political objectives.

“Since its proscription, the group has carried out intermittent processions in parts of Rivers State, especially in Oyigbo and some notorious suburbs in Port Harcourt Local Government Areas.

“More often than not, these illegal processions have become regular occasions for armed IPOB members to disturb the peace of the State by unleashing violence and destruction on lives and property at will.

“The Rivers State Government had severally pleaded, warned and even advised IPOB and its members to discontinue its insurrectional actions in Rivers State to no avail.

“This evil, wicked and audacious action resulted in the unnecessary loss of scores of lives, including soldiers and police officers, and the destruction of both public and private properties, including police stations, court buildings and business premises.

“Not done, they also visited physical violence on members of some targeted community which, but, for the quick intervention of the State Government and the security agencies, would have resulted in some form of internecine bloodbath in the State.

“Today, IPOB continued with its devilish and destructive activities at Rumukwurushi, Iriebe and Oyigbo in open defiance of the State Government’s curfew on human movements.

“Security intelligence and surveillance have revealed that IPOB has continued to expand its membership drive, holding meetings regularly, and expanding its logistical base, including the maintenance of illegal detention cells in Emenike and other parts of Diobu, Port Harcourt.

“As a matter of fact, Oyigbo town has practically become the group’s main operational base in Rivers State, from which they’ve become notorious for launching premeditated violence and terror on the State, businesses and innocent citizens.

“As a people, we have become very much unsettled by the terrorist acts and endured the continuing irritations, violence, destruction and provocations of IPOB in and against the people of Rivers State.

“We agree that Rivers State is part of Nigeria and has always been a home for all Nigerians and will continue to be because this is our true character.

“But it must also be understood that Rivers State belongs to the indigenous people of Rivers State.

“As a stranger element with strange political ideology therefore, IPOB has no legal or moral right to invade Rivers State or any part therefore at its behest; to disturb public peace; and subject lives and property to violence or threat of destruction under any guise.

“What is clear from this behaviour is that our love, accommodation and hospitality towards all are being mistaken for weakness by the banned IPOB.

“This being so, the time has come for us to sound this notice of warning that: enough is enough!!! We can no longer tolerate this IPOB evil monster in Rivers State. Never.

“As a Government, we owe our people and all residents the responsibility to protect their lives, property and wellbeing and to prevent trouble-makers of all shades and character from violating our collective peace, security and pursuit of happiness.

“Therefore, in view of the fact that IPOB has since been proscribed throughout Nigeria; and

“Having come to the firm conclusion that the activities of the banned IPOB are not just dangerous to lives and property but also constitute clear and present threat to the existential interest and aspirations of Rivers State and all our people;

“We have decided to reinforce, implement and enforce the existing judicial and national ban on IPOB by putting a total and complete stop to its presence and or activities in Rivers State or any part thereof.

“Accordingly, as from today 23rd October 2020, the Rivers State Government has:

(i) Outlawed IPOB from existing and or operating in Rivers State or any part thereof in line with the proscription order of the Federal High Court and the Federal Government.

(ii) No form of procession and or agitation by IPOB or any of its affiliates is allowed to take place in Rivers State or any part thereof, hence forth.

(iii) Security agencies are hereby directed to stop any form of procession or agitation by IPOB in Rivers State or any part thereof and arrest and prosecute any person or group that identifies with the membership or activities of IPOB in the State;

(iv) Government will issue an executive order to strengthen and ensure the effective enforcement of these measures;

(v) I will be meeting with all leaders of youth groups and community development committees in the State on Monday 26th October 2020 to take wholistic measures to counter and stop all IPOB activities in Rivers State;

(vi) Mr. Stanley Mgbere from Onne is hereby declared wanted for leading members of the banned IPOB to cause the recent violence and destruction of lives and property in Onne in Eleme Local Government Area; and

(vii) A ransom of N50,000,000.00 will be given to any person with useful information that would lead to the arrest and prosecution of the said Mr. Stanley Mgbere.

“I wish to appeal to the people of Oyigbo Local Government Area to remain calm and not to take the laws into their hands despite the intense provocation as government has the capacity to deal with the challenge and ensure the safety of lives and property in the Local Government Area.

“We will soon carry out on the spot inspection and assessment of the destruction they have suffered and take appropriate measures to mitigate the loss and damage caused to lives and property.

“We hereby express our sympathies to the families of all those that have either lost their loved ones or suffered damages to their properties from the destructive acts of IPOB in our State.

“Be assured that they have not died in vain and we will do everything within our powers to give all the victims justice.

“We appeal to leaders of the various ethnic groups residents in the State to ensure that their members respect the sensibilities of our people and refrain from provocations and acts of hooliganism that could breach peace and security in the State.

“Finally, I wish to assure all Nigerians that Rivers State will continue to be the home for all tribes as we will not shirk in our responsibility to ensure the peace, security and happiness of all residents in Rivers State.

“We cannot allow IPOB miscreants and other misguided similar groups to threaten our collective peace, security and wellbeing under whatever guise.

“Thank you and may God continue to bless Rivers State.