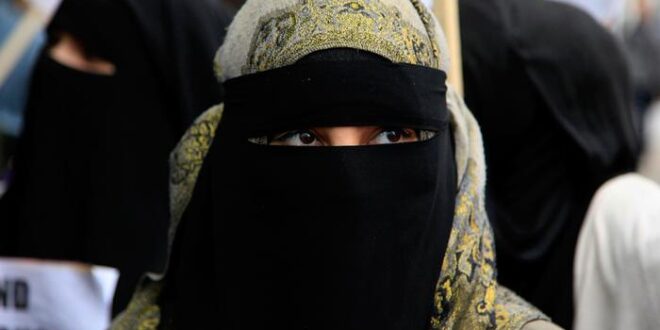 France to Extend Headscarf Ban to All Public Service Providers

French President Emmanuel Macron said the country’s ban on religious emblems, which notably affects Muslim women who wear headscarves or veils, will be extended to private sector employees, who are providing public services.

The state will also have the power to step in where local authorities make unacceptable concessions to Islamists, Mr Macron said, citing “religious menus” in school canteens or segregated access to swimming pools.

France is now mandating masks for all citizens in certain public areas during the coronavirus pandemic. But that doesn’t change the country’s ban on Islamic face coverings.

The French government confirmed that its years-long ban on wearing burqas, niqabs and other full-face coverings in public will remain in place, even as face masks become mandatory.

While French citizens nationwide will be covering their faces, women who do so with Islamic garb are still subject to punishment.

France’s Interior Minister confirmed to The Washington Post that the burqa and niqab bans remain, and women, who wear those coverings in public will be “punished with the fine provided for second-class infractions.”

The minister’s office said in a statement to CBS News that the law does not explicitly ban burqas or niqabs, but rather total facial concealment in public. During the pandemic, masks must be removed for identity checks, the office said.

Violations of the ban can lead to a fine of up to 150 Euros (about 162 dollars) and taking a required class in French citizenship education.

The ban does include an exemption for face coverings used for health reasons, and the ministry said wearing masks to prevent COVID-19 contagion will not be a criminal offence.

France began its mandatory mask policy as part of what the government calls “a new chapter” in its emergence from a strict coronavirus lockdown.

Masks will be required on public transportation and in schools for all people over 11.

France in 2004 banned headscarves in public schools, on the grounds that state institutions are supposed to be religiously neutral.

The ban also extended to Christian crosses and the yarmulkes worn by observant Jews.

In 2010, France banned face-covering niqabs and burqas in public, framing it as a move to promote open and equal interaction in society.

The ban set off protests where some people clashed with police.

France was the first European nation to pass such a nationwide ban.

Five others — Austria, Belgium, Bulgaria, Denmark, and the Netherlands — have followed with national or partial bans.

Other have local bans in some cities or are considering legislation on broader bans.

The UN Human Rights Committee in 2018 said that France’s ban violated women’s freedom of religion and “could have the effect of confining them to their homes, impeding their access to public services and marginalising them.” (dpa/NAN)