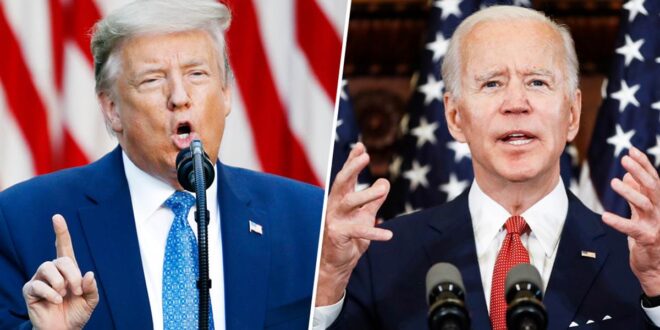 US President Donald Trump and his Democratic challenger Joe Biden have spent the final hours of the White House race delivering their closing pitch to voters in critical states.

But his lead is narrower in the handful of states that could decide the result.

Nearly 99 million people have already cast their ballots in early voting, putting the country on course for its highest turnout in a century.

US election 2020: A really simple guide

In the US election, voters decide state-level contests rather than an overall single national one.

To be elected president, a candidate must win at least 270 votes in what is called the electoral college. Each US state gets a certain number of votes partly based on its population and there are a total of 538 up for grabs.

This system explains why it is possible for a candidate to win the most votes nationally – like Hillary Clinton did in 2016 – but still lose the election.

Tuesday’s vote comes amid the ongoing coronavirus pandemic. The US has recorded more cases and more deaths than any other country worldwide, reporting more than 81,000 new infections on Sunday alone.

Businesses in New York City are boarding up their shop fronts in case of post-election unrest.

As the nation counts down the hours to the vote, there are fears that pockets of post-election violence could break out. Businesses in the nation’s capital, Washington DC, and in New York City have been seen boarding up their premises due to concerns about unrest.

Where were Biden and Trump on campaign’s final day?

After a punishing schedule of rallies in six states on Sunday, President Trump sprinted through four more battleground states on Monday.

In North Carolina, he told supporters that “next year will be the greatest economic year in the history of our country”. The rally was postponed from Thursday due to Hurricane Zeta.

He touted numbers that he says “nobody even thought possible”.

The US economy saw record-breaking 33% growth in the third financial quarter of this year, following a record 31% contraction in the second. Economists warn the damage inflicted by the pandemic – the biggest decline in the US economy in more than 80 years – could still take years to overcome.

After North Carolina, Mr Trump headed to Scranton, Pennsylvania, the city where his opponent lived until he was 10. At a rally there he reminded his supporters that he won the state in 2016 despite polls suggesting he would lose.

Mr Biden also went to Pennsylvania where he was joined by singer Lady Gaga at a rally in Pittsburgh. Musician John Legend addressed voters with vice-presidential candidate Kamala Harris.

At a last-minute campaign stop in Ohio, Mr Biden repeated the core message of his campaign, telling voters that the race was about the soul of America. He said it was time for Mr Trump to “pack his bags”, saying “we’re done with the tweets, the anger, the hate, the failure, the irresponsibility”.

Mr Biden made a last-minute campaign stop for a drive-in rally in Ohio. The race in Ohio is extremely tight. In 2016, Mr Trump won by more than eight points – currently, he has a 0.2% lead over Mr Biden, according to an aggregate of polls by RealClearPolitics.

On Monday, Mr Trump also held rallies in Traverse City, Michigan, and Kenosha, Wisconsin. Kenosha was rocked by violent protests in August after the police shooting of a black man.

In Traverse City he asked for the votes of black Americans.

He travelled to Grand Rapids, Michigan for his last rally, the same city where he held the final event of the 2016 election race.

On Sunday the candidates attacked each other on two of this campaign’s key themes – Covid-19 and racial tension.

The president and his campaign have meanwhile indicated they will sue to block the potentially pivotal state of Pennsylvania from counting postal ballots received three days after the election.

The US Supreme Court allowed a lower court ruling granting the extended deadline to stand, but several conservative justices signalled they might be open to revisiting the issue after the vote.

Mr Trump tweeted on Monday that the high court decision allowing ballots to be accepted three days after election day was “a very dangerous one”.

“It will allow rampant and unchecked cheating and will undermine our entire systems of laws. It will also induce violence in the streets. Something must be done!” Twitter added a warning label that the tweet might contain “misleading” information and blocked it from being retweeted.

Legal fights over ballots have also been unfolding in Minnesota, North Carolina and Texas.

The president is to host an election night party inside the White House with about 400 guests invited.

Up to 10,000 protesters are expected to gather on election night at Black Lives Matter Plaza and a park not far from the White House, according to CBS News.

Mr Biden and Ms Harris will watch the election night returns in the former vice-president’s hometown of Wilmington, Delaware.

Are we going to get a result on election night as usual?

It can take several days for every vote to be counted after any US presidential election, but it is usually pretty clear who the winner is by the early hours of the following morning.

In 2016, Donald Trump took to the stage in New York at about 03:00 local time to give his victory speech in front of a crowd of jubilant supporters.

Officials are already warning that we may have to wait longer – possibly days, even weeks – for the result this year because of the expected surge in postal ballots.

The last time the result was not clear within a few hours was in 2000, when the winner was not confirmed until a Supreme Court ruling was made a month later.

Different states have different rules for how – and when – to count postal ballots, meaning there will be large gaps between them in terms of reporting results. In some states it will take weeks to get complete results.

On the coronavirus outbreak, Mr Trump set up a task force in January which he says has now shifted its focus to “safety and opening up our country”. The president is also prioritising the speedy development of Covid treatments and vaccines, directing $10bn towards such projects.

Mr Biden wants to set up a national contact-tracing programme, establish at least 10 testing centres in every state, and provide free coronavirus testing to all. He supports a nationwide mask mandate, which would require face coverings to be worn on federal property.

On climate change, Mr Trump, being a sceptic, wants to expand non-renewable energy, and he has committed to withdrawing from the Paris Climate Accord.

Mr Biden says he would immediately re-join the Paris deal, and he also wants the US to reach net zero emissions by 2050.

On the economy, Mr Trump has pledged to create 10 million jobs in 10 months, as well as one million new small businesses. He wants to deliver an income tax cut, and provide companies with tax credits to incentivise them to keep jobs in the US.

Mr Biden wants to raise taxes for high earners to pay for investment in public services, but says the increase will only impact those earning over $400,000 a year. He supports raising the federal minimum wage to $15.