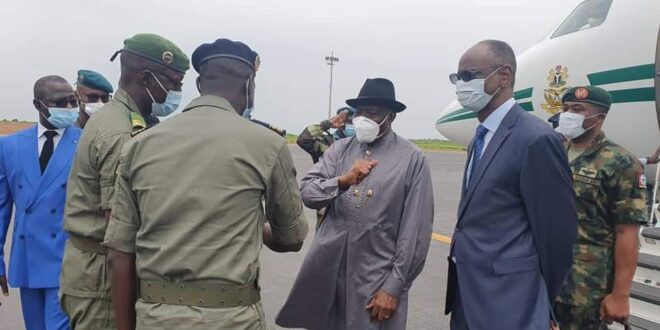 The talks on Saturday were set to last 90 minutes, according to a provisional schedule set by the Economic Community of West African States (ECOWAS).

It was not clear if the schedule had been changed or talks were cut short.

Tuesday’s overthrow of Mali President Ibrahim Boubacar Keita has been condemned abroad but celebrated by many in a country battling an armed uprising and months of political unrest.

A delegation from the 15-nation bloc arrived in the capital, Bamako, for talks aimed at reversing the overthrow of Keita and meeting the detained president.

“We saw him, he’s very fine,” said Jonathan. He told the AFP news agency that negotiations were going well and he was “very hopeful”.

ECOWAS has taken a hard line on the coup, shutting borders and halting financial flows – a move diplomats said was as much about warning opponents at home as stabilising Mali.

The highly anticipated meeting was held in the defence ministry, where ECOWAS mediators in face masks sat at a long table opposite military government leader Assimi Goita, who wore a desert camouflage uniform and was flanked by other military officers in berets and fatigues.

ECOWAS and the coup leaders, who call themselves the National Committee for the Salvation of the People (CNSP), have yet to comment on the discussions.