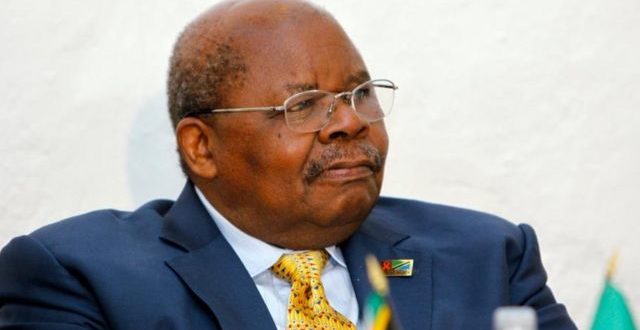 Former President of Tanzania, Benjamin Mkapa (picture), has passed away at the age of 81, President John Magufuli announced the death in the early hours of Friday.

“With great sadness I am announcing the death of former President Benjamin William Mkapa, who died in a hospital in the commercial capital Dar es Salaam where he was receiving treatment,” Magufuli said.

His statement was broadcast by the state-run Tanzania Broadcasting Corporation. Magufuli appealed to Tanzanians to remain calm following the death of their beloved leader.

In another statement, he announced seven-day national mourning for Mkapa.

“During the mourning period, all flags will fly at half mast,” he said in the statement.

Born on Nov. 12, 1938, Mkapa was Tanzania’s third president and served two five-year terms from 1995 to 2005, when he was succeeded by President Jakaya Kikwete.

In other news, founding Managing Director of Democrat Newspaper and former President of the Newspaper Proprietors Association of Nigeria (NPAN), Mallam Ismaila Isa Funtua, is dead. He died of cardiac arrest Monday night.

Previous Mali: ECOWAS Still in Search of Peace After Meeting in Bamako
Next SON Secures Conviction of Two over Engine Oil Adulteration in Lagos