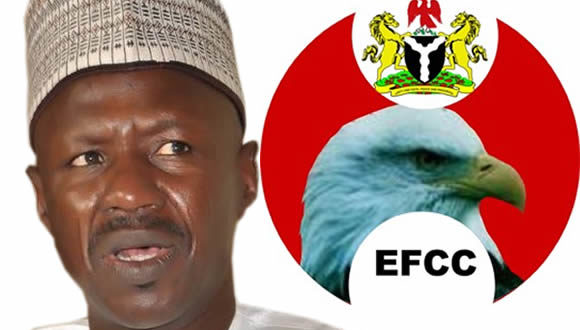 Nigeria’s media space was thrown into confusion on Monday afternoon with conflicting reports on the whereabouts of the acting Chairman of Economic and Financial Crimes (EFCC) Ibrahim Magu, who was first reported by sections of the media to have been arrested by the Department of State Services (DSS) over allegations of inconsistency.

According, Sahara Reporters, Magu was “arrested at the Wuse II office of the DSS on Monday afternoon and is now undergoing interrogation at the DSS Headquarters In Aso Drive.”

In a conflicted report, The Nation said that the EFCC boss was only invited before a panel probing the activities of his agency, adding “the panel is said to be sitting at the Banquet Hall wing of the Presidential Villa.”

“Magu was stopped in traffic while moving out of the Wuse II Annex of the EFCC in Abuja and the invitation was extended to him.

“Although Magu was on his way to the Force Headquarters, he pleaded with an officer from FCID who met with him to honour the scheduled appointment.

“But he was told the invitation by the panel was more important.

“At about 1.35pm, Magu arrived at the Villa where he was ushered into the wing.”

“He has not been arrested by any of the security agencies. We are awaiting further development. ”

The DSS in a statement signed by its Public Relations Officer, Peter Afunanya, denied arresting Magu, saying “the Department of State Services (DSS) wishes to inform the public that it did not arrest Ibrahim Magu, Acting Chairman of the Economic and Financial Crimes Commission (EFCC) as has been reported by sections of the media. The Service, has since, today, July 6th 2020, been inundated with enquiries over the alleged arrest.”

A reliable source confirmed to The Commerce Africa that a panel of unidentified members sitting at the Conference Centre of the Presidential Villa in Abuja grilled the EFCC boss though journalists who had arrived to cover the event at about 3.20 pm, were denied access by security personnel.

The political atmosphere has been nighted recently for Magu following strong allegations of corruption and insubordination levelled against him by the Attorney-General of the Federation. Abubakar Malami.