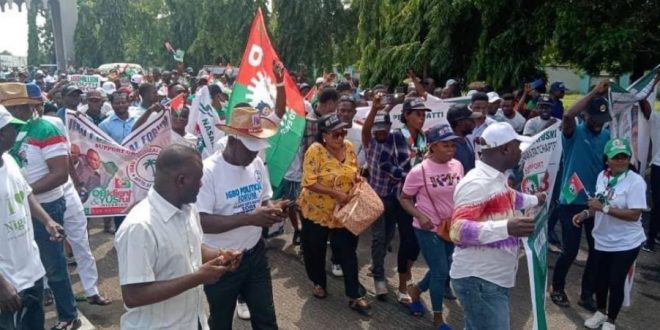 Eight support groups in Nassarawa State on Saturday, under ‘One Million Man March Campaign shut down activities on Lafia, Nasarawa State as they marched for Presidential Candidate of Labour Party, Peter Obi.

The group which comprised the youths and residents of the Nasarawa State, of the old, young, traders, students and civil servants on Saturday shut down commercial activities in the state during ‘One Million Man March Camping’ to announce their support for the Presidential candidate of the Labour Party.

The State Chairman of the Labour Party, Alexander Emmanuel, addressing the campaigners, said the One-million-man march was to sensitise and consicientise the people of the State on the need to elect credible leaders in 2023.

He said the campaign is to send the signal to the other political parties who claimed Labour party does not have structure.

Emmanuel expressed the confidence that the party would win the 2023 presidential election and all elective positions in Nasarawa State.

He added that the residents are worn out by bad governance and are itching to vote out the All Progressives Congress, APC, and the People’s Democratic Party, PDP and replace them with the Labour Party candidates in the coming elections.

“I accepted the request of the support groups, business class, the youth and members from other parties to embark on this sensitisation rally, because I want the people to understand the need why they should elect credible leaders into office in 2023. It is also to prove a point to other political parties who always say that our supporters are “only on the social media.”

A businessman, Kenneth Otublu, speaking on the rally, that attracted participants from over eight Local Government Areas of the State, said, traders in the State closed their shops and forfeited all the gains to show their concern for Peter Obi.

According to Otublu, the sufferings and hardships inflicted on
The people as well as the increasing cases of insecurity in Nigerian has called for drastic change.

“This is why we have sacrificed today to come out and show our support, solidarity for Labour party and the Presidential Candidate, Peter Obi.

“Nigerians must vote in 2023 for our children to return to school, to crash the high cost of food items and other issues that will help them out of the hands of APC”. He said.